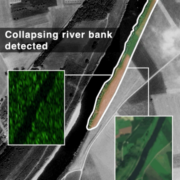 This time, we want to showcase the detection of an event related to the flood that happened in the Netherlands this summer. In Limburg, the floods caused the collapsing of a riverbank, which led to pipeline exposure, which in turn led to a leakage. You can read all about it in this news article: https://lnkd.in/eYikm6bg

In the news article, it says that the pipeline exposure and leakage was detected in the morning on Monday the 19th of July via a routine control activity. Orbital Eye analysed radar images for this location, and saw the event was already visible on radar images of Saturday the 17th of July.

What do we see in the GIF?