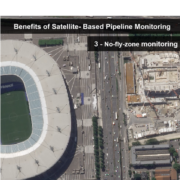 𝗠𝗼𝗻𝗶𝘁𝗼𝗿𝗶𝗻𝗴 𝗻𝗼-𝗳𝗹𝘆 𝘇𝗼𝗻𝗲𝘀 𝗶𝗻𝗰𝗹𝘂𝗱𝗶𝗻𝗴 𝗮𝗲𝗿𝗶𝗮𝗹 𝗶𝗺𝗮𝗴𝗲𝘀: often, parts of a pipeline network run through no-fly zones such as urban areas and airports, causing that aerial inspection by helicopter is not possible. Satellite-based Pipeline Monitoring allows to monitor pipelines where aircrafts as well as drones are off-limits, or only allowed to fly very high.

𝗕𝗲𝗻𝗲𝗳𝗶𝘁𝘀 𝗼𝗳 𝗖𝗼𝗦𝗠𝗶𝗖-𝗘𝗬𝗘:
✅ frequent monitoring of no-fly zones is possible
✅ optical imagery is provided for no-fly zones (if regulation allows)
✅ on-ground follow-up is only needed when an activity is detected by satellite

𝗕𝗲𝗻𝗲𝗳𝗶𝘁𝘀 𝗶𝗹𝗹𝘂𝘀𝘁𝗿𝗮𝘁𝗲𝗱:
The current example is set in Paris, above the Stade de France, where we survey the evolution of the constructions linked to the 2024 Olympic Games which are close to a pipeline we monitor. The city of Paris restricts small aircrafts and drones fly-overs under 3000m, which makes satellite-based monitoring the way-to-go!